The History of the IBCCF

Upon assuming the Chair of Biological Physics at the University of Brazil, in November 1937, some important questions were imposed on Carlos Chagas Filho, relating to his strategic vision on the institutionalization of research in basic sciences at the university, which would guide his intention to implement a new and comprehensive research program. The first one referred to the option to remain at the University of Brazil or at the Oswaldo Cruz da Fiocruz Institute (IOC). Until then, Chagas Filho had accumulated teaching activity at the Faculty of Medicine with research in the laboratories of Manguinhos and teaching in the Application Course 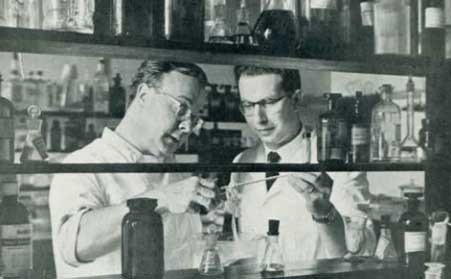 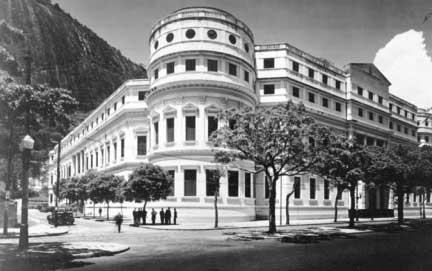 Upon taking possession of the chair, Carlos Chagas Filho was forced to resign from the IOC, by virtue of the recently enacted law that prevented the accumulation of positions in the public service. On the other hand, the same law was responsible for the dismissal of the other assistants from the chair, which would allow space for the formation of a new team. The first names to be part of the Biological Physics Laboratory team were Tito Enéas Leme Lopes, who was in the interior of São Paulo, and Lafayette Rodrigues Pereira Filho, who was already part of the chair's team when the holder was his father. Both were contemporaries of Chagas Filho at the Faculty of Medicine.

The next step would be to find a scientific model, a theme and an object on which to build your research agenda, applying the modern techniques of Biophysics. At the same time, the fact that the new discipline required different forms of institutionalization occupied his mind. The Amazonian Poraquê Electric Fish (Electrophorus electricus) provided him with an essential fact: it was the connection he needed with national Science and with a model of scientific policy aimed at modernizing the country, through the emphasis on training not only scientists, but also teachers who worked in secondary education , reformulating, from above, the entire educational system. There was also a strong concern about the low level of professionalization of science in Brazil.

Carlos Chagas Filho chose to settle down and implement his project at the university, relying mainly on the undeniable fact that this was a terrain in which he could use his social resources and scientific capital in a much more effective way. Some of the actors involved in the reformulation of the university structure, and who occupied key positions in the high state bureaucracy at that time, were people very close to our character. Once the conditions were created, there was still the difficulty of identifying the profiles and names that would be part of the team. If science colleges and schools were still in the implementation phase, the strategy adopted would be to seek professionals from among those who, like him, made scientific training a personal option, building their own path.

From Manguinhos came Almir Castro, whom he made responsible for preparing the course on statistics on small samples applied to genetics. Also came Hertha Meyer, a German scientist of Jewish origin, who worked in the vaccine preparation laboratory. Thanks to the repercussion of his work on cardiac tissue culture, it was possible to set up in 1940, with the help of Evandro Chagas and the financing of Guilherme Guinle, the Tissue Culture Laboratory.

An important recruitment strategy was carried out among medical students, especially among those in the 1st and 2nd year. They did their scientific initiation studying some aspect of the electrical potentials of the Poraquê fish (Electrophorus electricus), and this practice of socialization was adopted until the mid-1950s. According to Darcy Fontoura de Almeida, it allowed the expansion of the field for biophysical investigation, it was also the form of training in experimental techniques, in addition to representing the valorization itself. of a national ecology theme.

The great institutional change came at the end of 1945, with the elevation of the status of the Laboratory of Biophysics, which in fact was still the Chair of Biological Physics, in the Institute of Biophysics, and maintained, of course, quite a few relationships. with the redemocratization of the country, after the end of the Estado Novo. As he was in a moment of transition between two research models, the basic and the applied, and as there was not yet a policy focused on scientific development, Chagas Filho also faced all kinds of difficulties in implementing his scientific project at the university. It was necessary to establish salary compensations to make it possible for the researchers to remain, and they came mainly from the Guinle grant and grants from the Rockefeller Foundation.

Professor Carlos Chagas Filho was born on September 12, 1910, one year after the discovery of Chagas disease, a feat that transformed Carlos Chagas, his father, into one of the greatest Brazilian scientists. Son of miners, he was born in a quiet Rio de Janeiro, with few cars and exuberant nature.

The childhood years were spent in a comfortable home on Rua Paissandu, in the Flamengo neighborhood, and on vacation trips to the family's farms in Minas Gerais. From the house where he lived with his father, older brother Evandro, and his mother, Iris Lobo Leite Pereira, Chagas Filho kept fond memories: the big Sunday lunches that used to have distinguished guests from the scientific world, the first contact with the books through her housekeeper and the games in the orchard, where she enjoyed mangoes, avocados, jamelões and other Brazilian fruits.

The contact with nature was fundamental to arouse Chagas Filho's interest in science. His adventures in the green and vacations on the farm complemented the natural history classes that the young man attended in the Lyra course, where he finished elementary school. Then he went to Colégio Rezende, in Botafogo, where he finished high school. At this school, he took his first classes in physics and chemistry, in which he proved to be a great student.

The interest in Science, without a doubt, was strongly influenced by Carlos Chagas, who headed the Oswaldo Cruz Institute and the National Department of Public Health, in addition to having been professor of Tropical Medicine at the Faculty of Medicine of the University of Brazil. The observations and descriptions made by his father taught about the traditions of the land and instilled the importance of experimentation and research, combined with studies.

It was in 1934, the year his father died, that the then doctor met the one who would be his life partner. During a Carnival ball at the Country Club, Chagas Filho was enchanted by Ana Leopoldina Mello Franco – or Annah –, the youngest of diplomat and politician Afrânio de Mello Franco with Sílvia Cesário Alvim de Mello Franco. 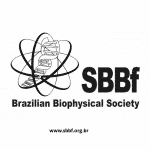